Did Sir Walter Raleigh prophesy the rise of Donald Trump and the terrible things that would happen afterward? Is the "end of crosses" the support Trump received from evangelical Christians? Is the "fear" that will make Christians "quake" yet to come? Will Trump trigger "great losses" in the form of a global depression or world war? The end of the poem is a riddle. Can you solve it?

On the Cards and Dice
by Sir Walter Raleigh

Before the sixth day of the next new year,
Strange wonders in this kingdom shall appear:
Four kings shall be assembled in this isle,
Where they shall keep great tumult for awhile.
Many men then shall have an end of crosses,
And many likewise shall sustain great losses;
Many that now full joyful are and glad,
Shall at that time be sorrowful and sad;
Full many a Christian's heart shall quake for fear,
The dreadful sound of TRUMP when he shall hear.
Dead bones shall then be tumbled up and down,
In every city and in every town.
By day or night this tumult shall not cease,
Until an herald shall proclaim a peace;
An herald strong, the like was never born,
Whose very beard is flesh and mouth is horn.

The herald whose beard is flesh and whose mouth is horn is a rooster. A rooster announces a new day. Will the new day be something that deprives Trump of power, such an impeachment, lost election, resignation, incapacitation, or death? But because a trump is a kind of horn, is it possible that a Trump family member will be Donald Trump's undoing?

Fascists of a feather
flock together.
—Michael R. Burch

Donald Trump and Benito Mussolini have many things in common ... not the least of which is that they appear to be identical twins! Is Donald Trump the reincarnation of the fascist Benito Mussolini? And there are many other striking parallels besides their looks ...

Will the fascist Donald Trump follow in the footsteps of Benito Mussolini, destroying the United States the way Mussolini once destroyed Italy?

The first striking parallel is that Mussolini and Trump appear to be identical twins, if not the same person (evidence of reincarnation, perhaps?) Please keep in mind that Trump would be as bald as Mussolini if not for cosmetic surgery ... 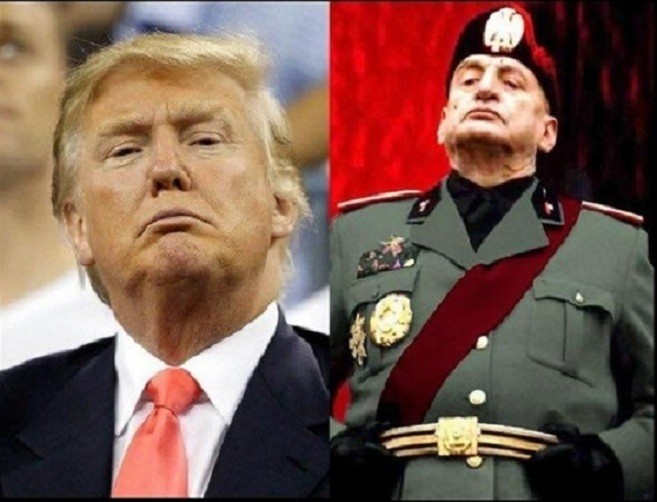 If we picture Trump without that bit of fluff surgically attached to his scalp, the resemblance is astonishing ...

A third parallel is how they operate ...

And here's another eerie similarity, in an excerpt from The New Yorker:

Ruth Ben-Ghiat, an American-born professor of Italian history at New York University, specializes in male menace. What interests her is the manufactured drama of world-historical strongmen—their mannerisms, speech patterns, stagecraft, and mythomania. Late last year, Ben-Ghiat had just published a book called Italian Fascism’s Empire Cinema, about the years of Benito Mussolini, when another spectacle wrested her attention. One of the candidates for the American Presidency was looking a lot like her principal academic subject. As President Obama put it, the United States now had its own “homegrown authoritarian.” Earlier this week, Ben-Ghiat sat at a table in her office, at N.Y.U.’s Casa Italiana, on Twelfth Street, inspecting two signatures on the screen of her laptop. One of them belonged to Donald Trump, the other to Mussolini. The scrawls—loopy, cursive, steepled—looked so similar that they seemed to blur together.

Mussolini was taken to be a sheep in wolves' clothing, until he proved to be a real wolf. Many Americans seem to believe that what Trump says cannot be taken seriously. But Ben-Ghiat disagrees about Trump: "He means everything he says. Authoritarians never pivot."

According to Ben-Ghiat, Mussolini described himself as an anti-politician, coined the slogan drenare la palude ("drain the swamp") and promised to make Italy great again. Ring any bells?